An aside, or: we're just trying to document what's left 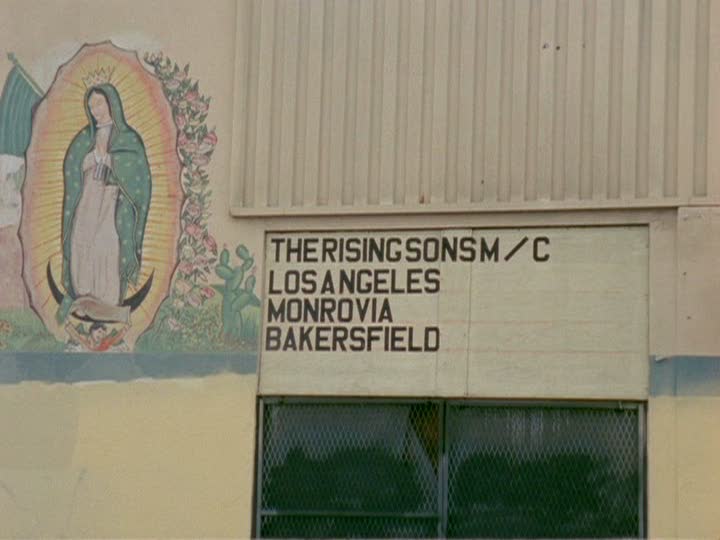 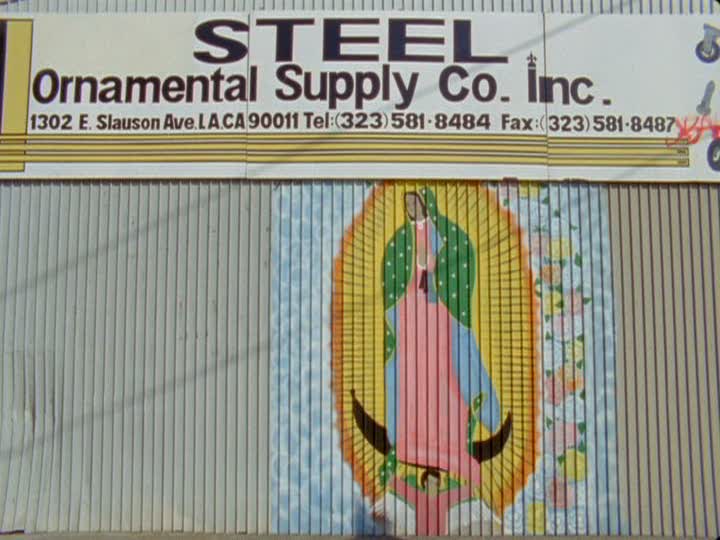 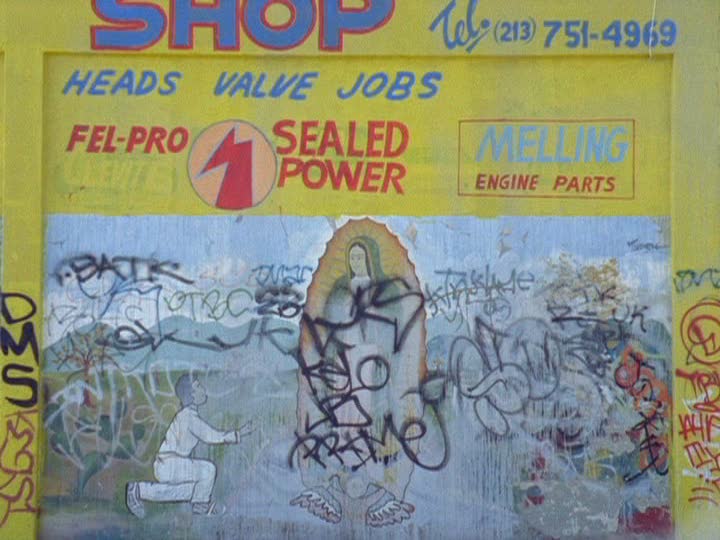 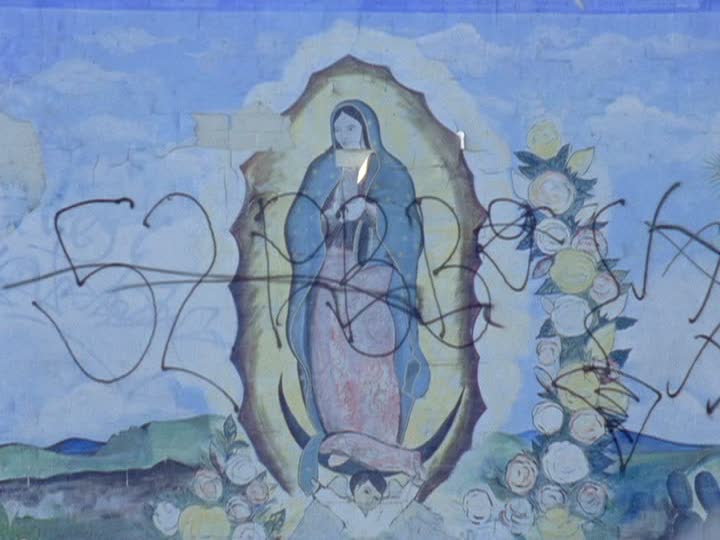 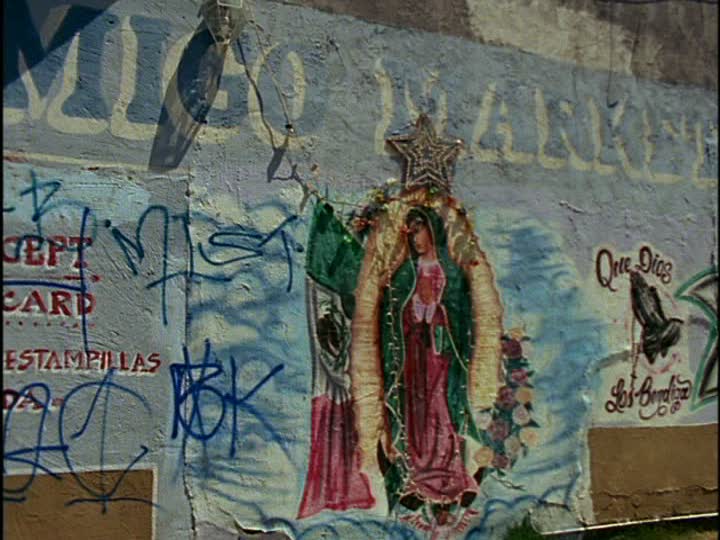 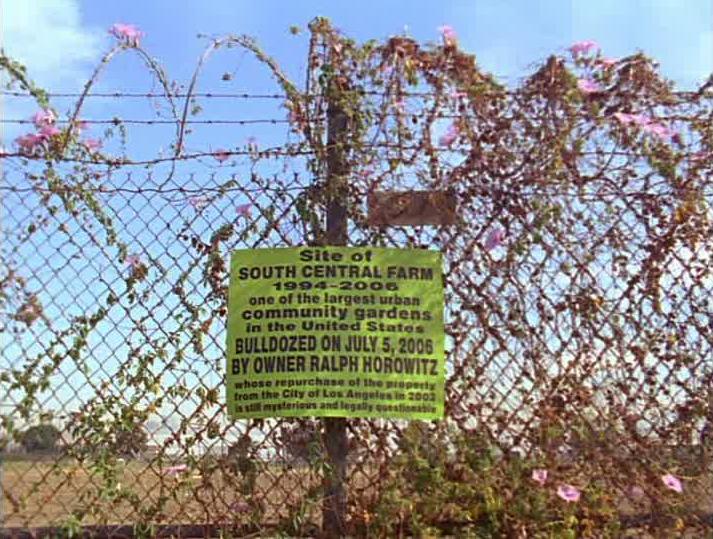 A striking and very moving moment in Thom Andersen's latest film Get Out of the Car: a few shots of weathered murals depicting the Virgin of Guadalupe (ten in total), an overgrown chain-link fence, a bold yellow sign. A testimony, or plea, is heard:

I think sometimes in these kinds of struggles we lose a bit of focus of what this really means for the community. It is as if... If I went to your community, and I took down your temple, if I took down your church, that's what we're talking about. These are sacred things. You're taking away our way of life.

The land beyond the fence used to be known as South Central Farm — one of the largest urban community gardens in the United States. It was developed on fourteen acres of land gifted to residents of Los Angeles in 1994, via a revocable permit held by the non-profit LA Regional Food Bank (for a more detailed history, see here). In 2006 it was sold by the City, for unspecified development, via a backroom deal. The farmers, who grew and provided food for 350 families, were evicted, and the land was bulldozed. There is a broadly sickening interview with Ralph Horowitz here, the property developer who demolished the site in the face of the Farmers' resistance. (I couldn't finish it.) The incident reminds me of a recent development closer to home, on a much smaller scale: Lewes Road. In Los Angeles, the farm was reclaimed by the City for a price; in Brighton, the guerrilla community garden was reclaimed by developers in the interest of (re)asserting its antithesis. Both were projects evicted in the face of ruthless corporate enterprise — an opposition to any conception of the land as common, and thus ground on which we can live outside of capitalism. As Andersen says of the (abridged) succession of shots above: "it is the one sequence of overt social criticism I left in the film, and the razor wire that surrounds it (also appearing in the three shots that follow) is the one thing I don’t like that appears." The rest of the film comprises an inventory of dilapidated public architecture, billboards, neon lights and corporate propaganda often subjected to the protest of graffiti, rust and decay — a document of what dominates our cities and their signs: profit motive, with little trace of the whispering wind. 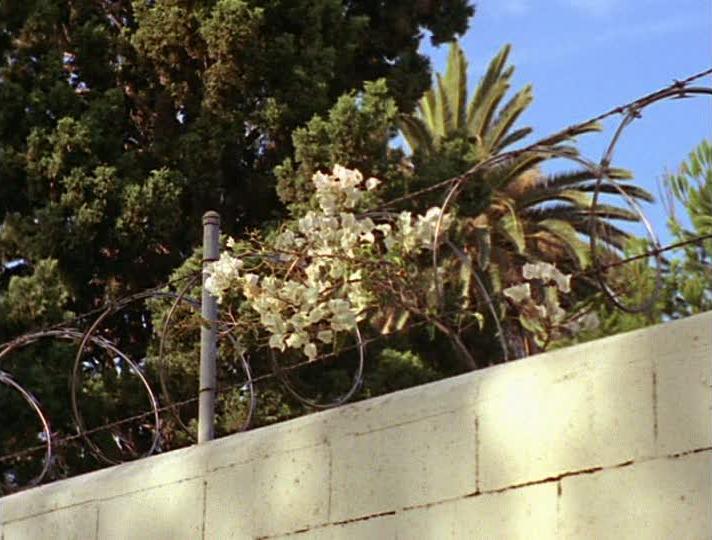 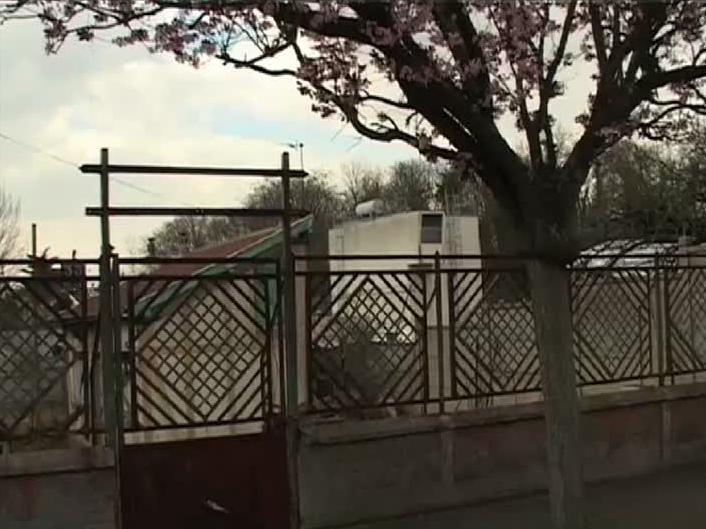 Posted by Matthew Flanagan at 01:20

This film, sadly, did nothing for me.

Quite the opposite here, Danny!

I really liked it a lot. Los Angeles Plays Itself was the movie that got me to move back to Los Angeles after living elsewhere for fifteen years. This one, on the other hand, gets pretty strongly at the sort of melancholy of just how hard this city works against those sorts of attempts to pursue a narrative line or project through it.

I just picked up Norman Klein's The History of Forgetting the other day, and this passage from the opening seems relevant to what I got out of Get Out Of The Car!:

"I realized how utterly inefficient this chain of production was, no matter how much greed and corporate ideology lay behind it. Throwing out mistakes, or even successes (but from the 'wrong' people) was another source of erasure. The direction of a 'rumor made solid' resembled a labyrinth of missteps more than a demonic process, even when the results were demonic indeed. In the minds of consumers, the source of these erasures resembled what psychologists call an imago, an idealized face left over from childhood - a photograph, the color of mother's dress on the day she took ill (the psychological trace). ... If we concentrate, the imago seems to be waiting for us intact: a photo, a document, a table of statistics, an interview. It remains where we put it, but the details around it get lost, as if they were haunted, somewhat contaminated, but empty. ... They are the rumor that seems haunted with memory, so satisfying that it keeps us from looking beyond it. The imago contains, as Kristeva describes so vividly, 'once upon blotted-out time,' when 'forgotten time crops us suddenly and condenses into a flash of lightning.' However, when the flash is over, much of what remains as urban history is picturesque, in itself a form of erasure. ...Imagos...are extremely deceptive. They make poor evidence ...The shock value obscures entire stages in the political history of collective memory. And the traces from one reception to the next are too faint in themselves to build much of a case. The mystery therefore is not how to find clues to an 'abject' crime. It is about perception itself - as a political context. Why do people fail to see 'the obvious'? Why is imaginary identification so difficult for things so clearly in one's best interest? Like Poe's famous 'purloined letter,' the clues sit openly on the mantelpiece, but are utterly unfindable. Something in the obviousness of them makes them instantly forgettable."

That's how Los Angeles often feels to me. And Get Out Of The Car! seemed to be able to show this - to show held images of what we try to not forget and how much we don't see even while we pursue these distortions of what it is we have seen.

"It is about perception itself - as a political context [...] the clues sit openly on the mantelpiece, but are utterly unfindable. "